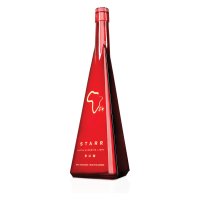 Mark Twain said, "Mauritius was made first, and then heaven; and heaven was copied after Mauritius." He was right! And Starr African Rum is the result of this little piece of heaven off the southeast coast of Africa. Mauritius produces the best sugar cane in the world. It begins with the ideal climate and some of the purest water on the globe, naturally filtered by volcanic rock loaded with minerals. Starr's unexpected flavor originates in the island's rich soil and reflects the vivacity of its African roots with a cherry and cardamom body plus hints of citrus, nutmeg, vanilla & cinnamon. Starr's smooth, clean taste derives from our sophisticated distilling techniques and aging process which creates this ultra-refined, award winning rum. Although subtle, Starr's character possesses an unmistakable joie de vivre captured in our exclusive bottle custom made by the master craftsmen of South Africa. Out of respect for this majestic island, Starr's distillery is environmentally sustainable. By harnessing the energy created from charring our cane, Starr's distillery is completely self-powered. From cane to glass, Starr Rum is produced entirely on the estate.